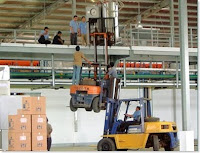 OSHA has cited two companies for violating workplace safety laws and proposed a total fine of more than $200,000.

A food transportation and storage company, Americium Logistics, was cited by OSHA for a total number of seven serious violations. The violations were defined as hazards that could have resulted in severe physical harm or even death according to OSHA.

The total violations included lack of adequate respirator for workers and failure for protecting ammonia piping from rupture. The company was also cited by OSHA for four repeated violations and one lesser violation resulting in a total of $153,000 in the proposed penalties.

OSHA spoke in a press release that the types of violations show the companies’ disregard for the safety and welfare of its workers. An organization should have safe practices to avoid tragedy into the lives of the workers.

To safeguard the safety and health of the workers, OSHA has mandated the OSHA safety courses for all workers. The OSHA safety training courses have been designed to help workers to be safe and know all the concepts to handle any hazards in work-sites.