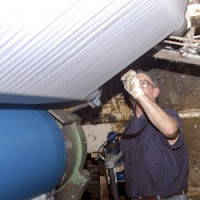 Lincoln Paper and Tissue has recently been slapped with a whopping $200,000 fine for various workplace safety violations, including violations that were related to an incident where an employee was injured.

OSHA has cited the Lincoln Paper mill for 9 repeat and serious workplace violations and has fined the company nearly $212,000. An OSHA spokesman said that many of the violations were based on issues that were brought up in a previous inspection in 2008 and were corrected but have recurred since then.

Keith Van Scotter, the owner of the paper mill has said that the mill’s safety record has improved drastically over the past few years and that each and every one of the citations have been corrected. In September, a worker was injured and suffered from serious burns and scalding hot water and steam fell on him. OSHA cited the company with 8 repeat violations and fines worth of $196,000 for failing to block the steam line and preventing such an accident. The company was cited for the same issues before, and has also been cited for training employees in safety related electrical work practices.

The paper mill has 15 business days to meet with the OSHA officials or to contest these findings.