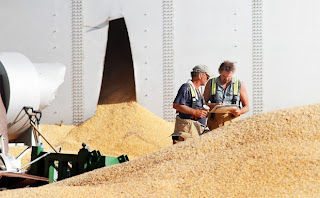 OSHA has recently fined the North Central Farmers Elevator in Ipswich with 6 willful violations for exposing workers to grain engulfment. The proposed fines amount to $378,000.

The worker who was engulfed was very fortunate to have survived, because under such circumstances, most people would not survive. Grain entrapments are highly dangerous and more often than not, end up killing workers who are engulfed. Grain elevator operators should always implement a number of safety practices to help prevent any injuries or deaths in a grain bin.

Last year, at least 26 workers were killed due to grain entrapments, and the number of cases keeps increasing each year. OSHA started investigating into the North Central Farmers Elevator facility in October last year after an employee was found engulfed by corn in a grain bin. The violations given out were related to grain and confined spaces, the failure of the employer to ensure proper lockout/tagout procedures, confined space and grain bin entry permits, atmospheric testing, etc.