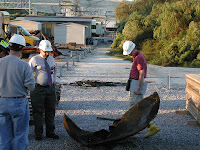 Cranes ville Block Company, a plant at Kingston, New York, has been caught by OSHA as the company is failed to maintain the safety measure of the OSHA standard for a number of violations and has been fined with with $45,500. The company had serious violations on chemical and electrical hazards and lack of equipment for workers. OSHA has found the company lack of safety glass and gloves for the workers in many industries who expose to acid, hazard chemicals, live electrical parts and many more. They have found blocked exit also in the industries that have caused serious injury and even death of the workers.

Regarding the company, the area director of OSHA's, Edward Jerome has told, "Employees at this plant are exposed to the hazards of electrocution, burns, eye and hand injuries, and being unable to swiftly exit the workplace in the event of a fire or other emergency. This employer must address these hazards effectively and continually now and in the future."

To ensure the safety and health and also to create a healthy environment, OSHA has proposed $45,500 fines against Cranes ville Block Co.

This kind of strict rules and fine can help a lot in preventing recurring hazards as the company will have to pay a huge amount of fine if they repeat the violation again which they do not want.