Chicago's Food Processing Facility Slapped with a Heavy Fine of $212,000 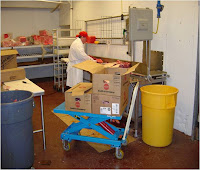 Bridgford Foods Processing Corp. facility in Chicago has been issued 10 safety citations by the U.S Department of Labor's Occupational Safety and Health Administration for failing to provide proper training to workers on lockout and tagout procedures. Now, the meat processing plant is facing a heavy penalty of $212,000.

“By failing to train employees and enforce lockout/tagout procedures, Bridgford Foods placed employees in danger of serious injury from equipment that was not properly de-energized”, said Gary Anderson, who is the area director of OSHA in Calumet City, Ill. “OSHA is committed to ensuring that workers are provided a safe and healthful workplace”, he added.

The July 2010 OSHA inspection issued Bridgford Foods Processing one willful violation and a penalty of $70,000. The citation was issued for allowing employees to remove a shovel stuck in an auger screw conveyor without tagging or locking it out, thereby putting them in danger of the machine operating while they work towards removing the shovel.