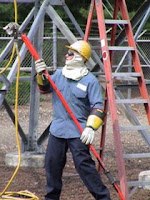 Best Plastering Contractors in El Paso, Texas, has been fined by OSHA for five repeat citations. The company has allegedly been penalized for exposing workers to fall hazards. The proposed fines sum up to almost $99,000.

Jack Rector says, “Falls are one of the most common and well known hazards at a construction site. This is not the first time this company has jeopardized the safety of its workers”. Rector is OSHA's area director in El Paso, “Falls can injure or kill a worker within seconds. It is fortunate in this case that there were no injuries or fatalities”, he added.

The El Paso's Area Office of OSHA initiated this inspection on the 19th of October, 2010. The inspection was started after observing employees working on a scaffold without the use of fall protection equipments. Best Plastering Contractors has employed 18 workers at its El Paso facility. 8 of these workers were present at the site at that time.

The violations the company has been cited for include failing to provide base plates and mud sills for preventing scaffolds from becoming unstable, ladders for safely accessing all the working levels of the scaffold, training for those employees who carry out scaffolding work, fall protection equipments and systems like guardrails and/or personal fall arrest systems like harnesses to the employees working on the construction site. OSHA issues a repeat citation when an employer has been cited for the same or similar violation of a standard, rule, regulation or order at any other facility in federal enforcement states within the last five years.