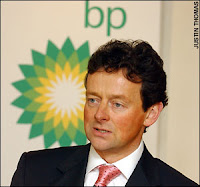 BP's board is most likely to replace its current chief executive Mr. Tony Hayward with an American named Robert Dudley. However,this decision though sudden is a planned appointment. A person close to the BP's board confirmed that Robert Dudley would in fact run the London–based company. It is also interesting to know that the United States has become very vital to BP since nearly one third of the company's refineries, oil as well as gas wells interests are in the United States. Furthermore, 40 percent of BP's shareholders are Americans.

In 2007, when Mr. Hayward was appointed as chief executive, he pledged that he would focus “like a laser” on any safety issue. This is the very line that Hayward has come to regret in 2010. The oil spill brought out BP's ignorance towards the very issue that Hayward preached about and his tone-deaf performance made the situation even worse.

To bring to light Mr. Hayward's ignorance, here are a few of his comments on the day of the oil spill:
Mr. Robert Dudley has a very short track record in the gulf. However he has already earned the hearts of some people. For instance Mr. Dudley met with the Governor of Alabama a week ago. Later Todd Stacy, a spokesman of Mr. Riley informed the media that “the governor felt that Mr. Dudley was very responsive to Alabama’s concerns.”

Thus, the appointment of Mr. Robert Dudley simply highlights the fact that merit and competency are just more important than nationality.