Is Rapid response the Answer to Future Oil Spills 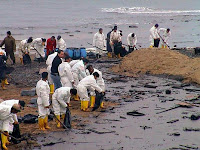 Oil spill workers have been playing a major role with regards to the Deepwater Horizon disaster. At any particular time, there are more than 42,500 personnel and more than 2,000 Federal employees who are directly involved in the cleanup operations across the four states.

OSHA has been working along side the U.S. Coast Guard and several other government agencies that deal with health and the environment. OSHA has constantly been evaluating BP's efforts such as making sure that BP puts in place all of the precautions needed to protect workers from any hazards that are associated with their cleanup. An update on OSHA activities to protect oil spill workers in the Gulf will be available every single day.

For instance Big Oil has been trying to assure everyone that it is indeed prepared for the next Massive oil spill. ExxonMobil, Chevron Corp., Conoco Phillips and Shell Oil have even agreed to come together and form a company worth $1 billion. This company would in turn respond to any Offshore oil spills at up to 10,000 feet underwater. Further, their systems would deploy equipment that would reach the site of the oil spill within days. In other words, their answer to future oil spills is a faster response.

Several members of the Congress have openly criticized the oil industry for being terribly ill-prepared. Furthermore, the White House has imposed a moratorium on Deepwater drilling. This has also affected the oil company share prices.

BP's oil spill disaster has leaked nearly 180 million tons of oil into the Gulf. Although BP was informed about the joint venture they had nothing to say about the new response system.

This new response system would draw from the lessons learnt from BP's efforts.
This response system will also include an array of several underwater equipment that would be designed to withstand extreme pressure and depths. Further, this equipment would separate the oil from gas and bring it to the surface where the gas would be burnt off and the oil would be stored in large tankers.

Finally in accordance to their joint statement, the four companies would create a nonprofit organization called the Marine Well Containment Company that would operate as well as maintain the response system.