Roofing Firm of Illinois Slapped with a Fine of $102,000 for Lack of Fall Protection 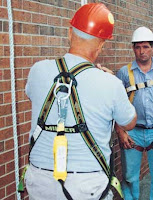 McEntire's Roofing Inc., of Lincoln, Ill., has been issued six citations by the Occupational Safety and Health Administration. The company has been cited with violations for failing to provide proper fall protection systems for all the roofers employed for working on residential projects. The sum of the penalties faced by the company is $102,000.

OSHA had carried out two investigations under its Local Emphasis Program on Fall Hazards in the month of July and September, last year. The proposed penalties are a result of this inspection that was carried out at jobsites located in Bloomington and Lincoln, Ill. The inspectors observed roofers being allowed to operate without fall protection at the two storey residential projects and issued two wilful citations with $56,000 in the proposed penalties.

According to the OSHA's area director in Peoria, Ill., Thomas Bielema, “Falls are a leading cause of injury and death in the workplace. McEntire's Roofing repeatedly has been cited for not providing adequate fall protection and that is unacceptable. OSHA is committed to ensuring employers abide by the law, which requires common sense safety practices”.

In addition to this, a proposed fine of $42,000 has been issued for two repeat citations that include “not having a grasping handle and/or a ladder extended 3 feet or more above the roofline for workers to access in order to prevent falls”. Then an extra two serious citations have been issued for having a damaged ladder to access an upper roof area and failing to have the ladder checked by a competent person. These citations carry another $4,000 in penalties.