Gulf of Mexico Oil Spill And Remarks of BP boss 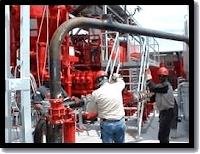 As the Gulf of Mexico oil spill has effected to a great extent, the clean up operation has also been going for a long time and the most important point is that the catastrophe that is made by this big oil spill has snatching the attention of all the world political leaders, environmentalist and socialist. At this point of time all we hope is to diminish the effect soon. US president Barack Obama has also paid much attention regarding this oil spill. He has said already that BP will have to face criminal charges and also a year-long ban on new offshore deep-water drilling. But it's surprise that the boss of BP has been commenting on all the matters differently.

According to Obama, BP's catastrophe "may prove to be a result of human error – or corporations taking dangerous shortcuts that compromised safety". So, he mentioned that this is the time for the oil industry to pay for green energy. This is count as the world's biggest economy off fossil fuels and he hopes to start communicate with it taking the help of public outrage about the disaster.

Regarding the payments, two American senators wrote to Tony Hayward, chief executive of BP that it would be "unfathomable" to maintain its $10bn (£6.8bn) of dividend payments under the circumstances for the company. But the company boss is of the statement that the company has enough cash to avoid a dividend cut this year.

The BP boss has expressed many such tactless remarks about the crisis and has faced unprecedented criticism. But he said sorry as he gave "a hurtful and thoughtless comment''. He said, "I apologies, especially to the families of the 11 men who lost their lives in this tragic accident."

Amidst all these controversies, OSHA has continuously offering helping hand by providing OSHA safety training to the workers who are involving in the clean up operation of the Gulf of Mexico oil spill and in the real sense doing something worth.