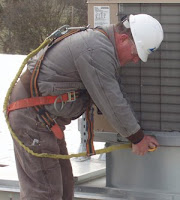 In January 2009, an employee was issued a notification of formal investigation by Iowa Interstate Railroad for reporting a work injury and also retaliated against the employee by disciplining him in the form of a letter of censure. The employee filed a whistleblower complaint alleging that the railroad had retaliated against him for reporting his work injury. After getting the complaint, Whistleblower Protection Program of OSHA conducted an investigation under the Federal Rail Safety Act, and found merit to the complaint and ordered relief.

Michael G. Connors, OSHA regional administrator in Chicago, said, "An employer does not have the right to retaliate against its employees who report work-related injuries. While OSHA is best known for ensuring the safety and health of employees, it is also a federal government whistleblower protection agency."

The case has taken OSHA to order IIR to cease and desist automatic issuance of a notice of investigation for employees who report work injuries without reasonable suspicion that a hearing will uncover evidence of a policy violation or misconduct. IIR has also been ordered to take proper actions by expunging all files and computerized data systems of references to the disciplinary hearing involving the employee, as well as those of references related to the letter of censure.

Moreover, OSHA has ordered the railroad to pay the employee $1,000 in punitive damages, to post and provide its employees with information on their FRSA whistleblower rights and within 30 days inform the OSHA regional administrator in writing of the steps it has taken to comply with the above order.

Within 30 days from receipt of the findings, IIR and the complainant have to file an appeal with the Labor Department's Office of Administrative Law Judges. Railroad carrier employees and its contractors and subcontractors are protected under the FRSA against retaliation for reporting on-the-job injuries and illnesses, as well as reporting certain safety and security violations and cooperating with investigations by OSHA and other regulatory agencies.