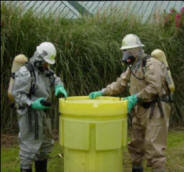 Oil spill in Mexico has become a threat to the vacationers who usually enjoyed the fun and sun in the lovely Gulf Coast near Destin. Officials fear that this time there may be an economic disaster due to the oil spill accident. But, though people have seen a few tar balls show up, it is disclosed that the world famous sugar sands are largely pristine in Destin and are still open for business.

Dennis McKinnon, the Escambia County Chairman of the Tourism Commission said, "The perception that everybody has is: No way am I going to the beaches of Florida right now because if I get in the water I'm going to get tar all over me. And it just isn't happening today.”

But according to the coast guard, nothing like this will happen at least for the next few days, as they have not found anything significant while they were within three miles offshore with skimmer and cleaning vessels.

Roger Dow of the U.S. Travel Association said, "We have a reality crisis as to what is actually going on with oil, but probably even more damaging potentially is a crisis of perception.”

Tourist visits in Louisiana, Mississippi and Alabama already have reduced due to the oil spill and for the pro-tourism ads that are run by the state, Florida stands to lose the most.

Oil spill has recently taken a toll on the vacationers who used to come to the beaches in Florida. It is going to effect the economy of Florida to a great extent.