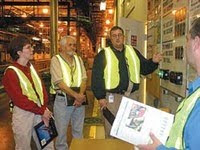 The United States, Department of Labor's, OSHA or Occupational Safety and Health Administration, has recently cited the Pasadena Refining Services Inc. with 21 serious safety violations, for primarily exposing workers to multiple health and safety hazards at the organization's facility in Pasadena. The proposed penalties have mounted up to a total sum of $115,650.

The Occupational Safety and Health Administration's, Houston South Area Office in Texas began its investigation on the 30th of June, at the organization's facility, that is located on the Red Bluff Road, which was a part of the company's national emphasis training program on the safety management process of refineries.

Some of the serious safety violations, that were committed by the company are listed below:

A serious violation, can be defined as, “one in which there is substantial probability that death or serious physical harm could result from a hazard about which the employer knew or should have known”.

OSHA's area director for the Houston South Area Office, said that, "OSHA's National Emphasis Program is designed to comprehensively evaluate the petroleum refining industry," he further went on to say that, "An employer's lack of compliance with OSHA's standards will not be tolerated."

But, as usual the company has 15 business days to either comply with or contest the findings.