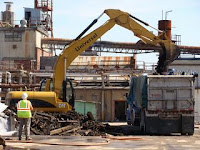 The regulatory agency of the United States, OSHA, has penalized Simsmetal East, for exposing several workers and employees to lead hazards, at its Claremont Terminal site, which is located in Jersey City. These proposed penalties have mounted up to a total sum of $188,500.

The director of OSHA's Parsippany Area Office in New Jersey, Kris Hoffman, said that, "Simsmetal East knowingly put its workers at risk by failing to protect them from overexposure to lead, which can cause brain damage, paralysis, kidney disease and even death," he went on to say that, "OSHA is fully committed to holding this company legally accountable for its blatant disregard of federal law."

1.Failing to fit-test workers and employees, with regards to using tight fitting, face respirators, prior to the initial use of the respirator.
2.Failing to make an initial determination, in case workers are exposed to unhealthy levels of airborne lead and
3.Failing to ensure that all surfaces were maintained free of lead accumulations.

As usual, the company has fifteen business days to either comply with or contest these findings, in front of an independent OSH Review Commission.