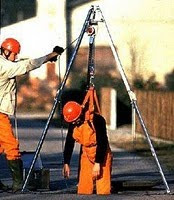 The United Occupational Safety and Health Administration has recently descended on the death of a student who was filming the football practice on Wednesday. The boy fell down from a scissor lift that was around 50 feet high in the air with wind gusts of more than 50 mph.

OSHA has sent an investigator to the scene of the unfortunate accident. The Notre Dame student, Declan Sullivan, was around 20 years old. An hour and a half before his death, Sullivan wrote “Gusts of wind up to 60 mph well today will be fun at work... I guess I've lived long enough” on his Twitter account. An hour later, probably when he was still up in the lift, he added, “Holy (expletive) holy (expletive) this is terrifying.”

OSHA will be finding out who exactly instructed Sullivan to get into the lift in the first place. As per the guidelines from one of the manufacturers of the type of the lift the student was on, the scissor lift must not be used in wind gusts greater than 25mph. As we can gather from his second post, Sullivan pretty much realized that he was in a potentially dangerous situation.

The Notre Dame officials are obviously going to face the hard questions in the coming days and weeks. The loss is a completely senseless tragedy and the Sullivan family deserves honest answers.