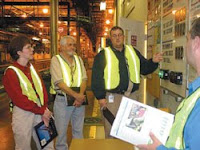 OSHA, the U.S. Department of Labor's Occupational Safety and Health Administration, has heavily fined Rockford's Lowe's Distribution Center. They are looking at a penalty of almost 200,000 dollars for failure of documenting and reporting employee injuries. This documentation and reporting is required as per OSHA Safety and Health regulations.

The OSHA Area Director of North Aurora Ill, Kathy Webb says that correct records for injuries and illnesses are extremely important in protecting workers' health and safety. “Accurate records are an important tool that employers and workers can use to identify hazards in the workplace, and they also enable OSHA to better target its resources”, she adds.

The Lowe's Distribution Center has already received two repeat violations with hefty fines of $20,000. Interestingly it has also received two penalties of $2,000 for other not very serious record keeping violations.

After hearing about the proposed fines, Lowe's issued a statement saying, “The safety and well being of our employees and customers is Lowe's highest priority. Lowe's will be discussing the validity of the citations and proposed penalties with OSHA and looks forward to the opportunity to formally respond to the citations issued today”.

A period of 15 days has been granted to Lowe's Distribution Center to meet and discuss the cited penalties with OSHA.