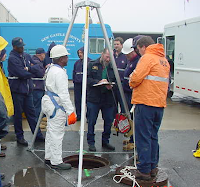 Have you heard about Black Friday? Well, it is considered by many to be one of the biggest shopping days. But more importantly, it marks the beginning of the holiday gift season. Unfortunately, it is also considered as one of the most deadly days, for just 2 years ago a Valley Stream Wal-Mart worker was trampled to death by a stampede of shoppers.

An employee of Valley Green Wal-Mart said that, “I think we’re going to beef up the security this year”. He further stated that, “We just want to make sure that everything goes smoothly, and to be prepared in case it doesn’t.”

OSHA has also done its part by releasing a list of safety precautions, for employee’s, retailers and even shoppers, in order to prevent history from repeating itself.

Present below is a list that has been formulated by some of the best OSHA experts that highlight the safety measures that people ought to observe on that faithful day:

2.Next, retail owners need to make sure that the outside personnel have radios in order to communicate with personnel inside the store and emergency responders.

3.Lastly, they need to set up rope lines or barricades for crowd management well
before customers start arriving at the stores.

One of the Roosevelt Field employees’ said that, “I’m on the schedule for that day and to be honest, I’m worried.”