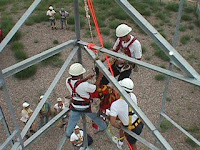 At an apartment complex in Plantation, a 26-year-old Stuart man died, after a bizarre landscaping accident.

Battalion Chief Joel Gordon, of the Plantation Fire Department, said that the man was riding an industrial lawn mower next to a man-made lake. His co-workers, six to be exact, were also doing maintenance work at Southern Point, but apparently in different areas.

The Battalion Chief Joel Gordon, went on to say that, “Somehow the mower ended up in the lake, with him trapped under it.” he also stated that, “I say `somehow,' because we're not sure how the accident happened, or even when it happened. He even said that, “we don't know how long he was in the water. No one saw him go in. But a resident called 911 at about 10:20 am.''

The Plantation police officers were the first to arrive on the scene. They were even able to find the spot at which the man and mower entered the water. However, the water was too dark and too deep for officers to locate him.

Both the Plantation police and OSHA are investigating this bizarre incident. In accordance with OSHA, such incidents are definitely not rare, for six to ten years back, eight such accidents did occur. That is, lawn mowers suddenly flipping over on hills or next to water, which resulted in either injuring or killing the operators.