Nearly $136,000 Proposed By OSHA In Penalties To Sewon America Inc 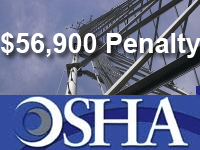 The U.S. Department of Labor's Occupational Safety and Health Administration (OSHA) has cited Sewon America Inc. in LaGrange, Ga., for several safety violations after receiving a complaint. OSHA did extensive inspection of the company's facility in March. Penalties total is $135,900.

Sewon America Inc. has been cited with two willful violations; one for failing to provide workers with appropriate hand protection and second was failing to protect workers from arc welding flash burns. According to OSHA a willful violation as one committed with plain indifference to or intentional disregard for employees' safety and health.

The company also has been cited for other 12 serious safety violations and proposed penalties for failing to train or evaluate all workers operating industrial trucks,during wielding operations failing to guard against confined sparks, failing to provide tagout/lockout procedures for energy sources, failing to provide proper machine guarding on various machines and various electrical deficiencies. A serious citation is issued when there exist substantial probability that serious physical harm or death could result from a hazard about which the employer knew or should have known.

The company receives 15 business days from receipt of the citations and proposed penalties to comply,request an informal conference with the OSHA area director or can contest the findings before the independent Occupational Safety and Health Review Commission.