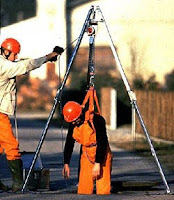 The federal government's workplace watchdog continued its investigation on Wednesday into the death of a grain elevator employee that took place in Bloomfield. An employee of the Battle Creek Farmers Cooperative, Rod Hennings, 64 of Crofton, died at the co-op's Bloomfield branch Monday when he went inside a storage structure and got trapped in a pile of corn.

Bernard Hauber of Omaha office of the Occupational Safety and Health Administration(OSHA) said it could take monthsto find out the particulars of what happened. According to Evelyn Hennings,her husband who was of more than 40 years was transferring corn out of the bin when the accident happened, but she knew only few details.

The Feed Association and Nebraska Grain has been urging greater vigilance about potential of grain entrapment this spring due to the unusually wet condition of much of the 2009 corn crop. Wet corn can cake up against the walls of bins while unloading, forming air pockets under the surface and stopping the flow of grain into augers.

The danger can be seen if augers are left running while a worker enters the bin to investigate without any safety rope or some other means to avoid being drawn into a sudden cascade of grain if an air pocket collapses.

"Accidents like this just shouldn't happen," Pat Ptacek of the Grain and Feed Association said. The Battle Creek Farmers Cooperative issued a statement saying that, in part the circumstances of Hennings' death "remain unknown."

"This tragic loss will have a significant impact on the Co-op and the communities of Bloomfield and Crofton, but more importantly on the Hennings family," was said in the statement.

Depending on what the investigation turns up, OSHA can possibly impose fines for workplace violations.